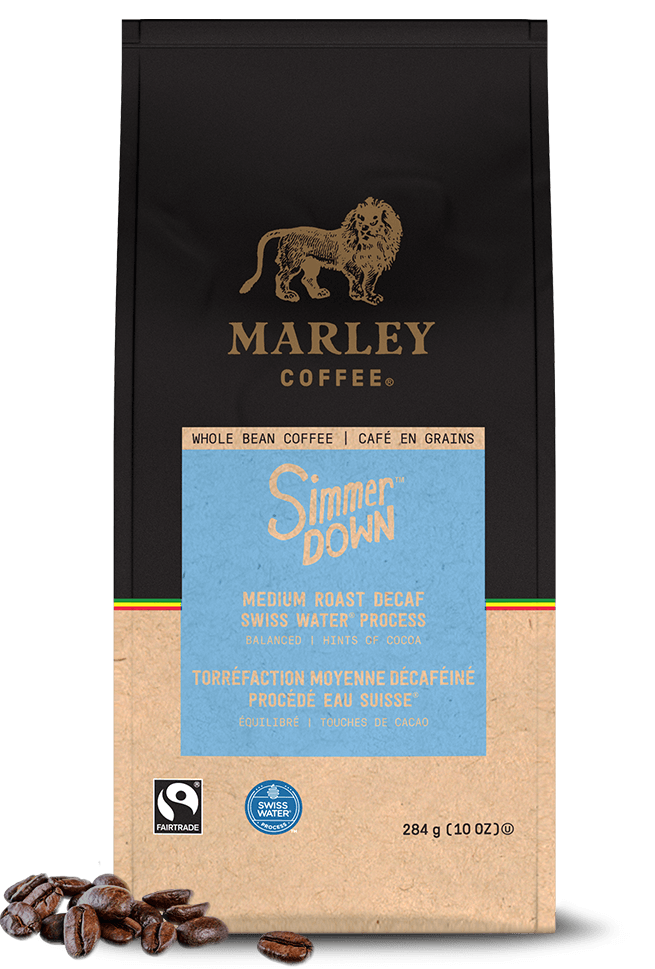 One good thing about music, it unites people from all walks of life. Be a part of our music community and tell us your favourite Bob Marley song to cover and use #SimmerDownSessions for a chance to win a solo studio session or bring your band along. We’re also inviting our followers to upload their covers and tag us so we can share our favourites.

Entry Period: Promotion is open between 6:00AM Eastern Daylight Time (“EDT”) on October 21, 2019 and 11:59PM PST on November 3, 2019 (the “Entry Period”). Promotion open only to legal residents of Canada (excluding Québec), who are 18 years of age or have reached the age of majority in the area where they reside, whichever is older. Employees of the Sponsor and their immediate family members are not eligible.

How to Enter: To receive one (1) entry during the Entry Period, follow the Marley Coffee page on Facebook at www.facebook.com/MarleyCoffee, or Instagram at www.instagram.com/marleycoffee/ or Twitter at www.twitter.com/MarleyCoffee and follow the specified instructions to comment on the timeline post specified by Mother Parker’s Tea & Coffee Inc. (“Sponsor”) and using the hashtag #SimmerDownSessions. No purchase or payment of any kind is required to enter. Making a purchase does not increase your chances of winning. The odds of winning depend upon the number of qualified entries received. Many public libraries, retail businesses and others offer free computer and internet access and a number of internet service providers and other companies can provide an email address for free, allowing a person to create a Facebook, Instagram and/or Twitter account.

Draw: One (1) grand prize winner and four (4) potential back-up winners will be selected in a random drawing occurring on November 15, 2019 at noon EST in Toronto, Ontario from among all eligible entries received during the Entry Period. In Canada, all potential winners will be asked to answer a mathematical skill-testing question before claiming a prize. If a potential winner does not meet the eligibility requirements and/or is ineligible for any other reason, he/she may be disqualified and an alternate winner selected. The selection of winners is final and binding in all respects.

Prize: One (1) full day recording session at Grayson Matthews Recording Studio in Toronto, Ontario of either your Bob Marley cover or an original song, including a consultation with a Grayson Matthews producer. Equipment available as per the Record Studio’s resources, following a consultation with the winner. Final master of the final recording delivered in a digital format. Also includes transportation to Toronto, Ontario for two (2) individuals, total ticket value up to a maximum of $1,000 CAD per passenger, and accommodation for a two (2) night stay at a Toronto, Ontario hotel, up to a maximum value of $1,000 CAD.

Total prize value up to a maximum of $10,000 CAD. No cash redemptions or prize substitutions or transfers will be permitted. Prize recipient will receive a comment via Facebook, Instagram or Twitter and will be required to direct message Sponsor within 72 hours to provide a mailing address for prize fulfillment or prize recipient will be deemed to have forfeited the prize and one of the other winners will be contacted. Travel to be completed and prize to be redeemed by June 30, 2020.

Winner will be required to sign a waiver notice prior to travel, that provides consent to Marley Coffee, Mother Parker’s Tea and Coffee Inc., and Sandbox Inc to photograph, record, use and publicize their voice, actions, likeness and appearance, in any manner and media to reuse any photography and video content captured from the event for future promotion.

General Conditions: Promotion may be withdrawn without prior notice. Released Parties (as defined below) are not responsible for lost, late, incomplete, damaged, inaccurate, stolen, delayed, misdirected, or undelivered entries, likes or comments, incorrect, changed or non-functioning Facebook, Instagram or Twitter accounts; or for lost, interrupted or unavailable network, server, Internet Service Provider (ISP), website, or other connections, availability or accessibility or miscommunications or failed computer, satellite, printer errors, telephone or cable transmissions, lines, or technical failure or jumbled, scrambled, delayed, or misdirected transmissions or computer errors of any kind whether human, mechanical, electronic, typographical, printing or otherwise relating to or in connection with the Promotion, including, without limitation, errors which may occur in connection with the administration of the Promotion, the processing of entry requests, likes, or comments, or in any Promotion-related materials. Released Parties are not responsible for injury or damage to participant’s or to any other person’s computer or printer related to or resulting from participating in this Promotion or downloading materials from or use of the website. Persons who tamper with or abuse any aspect of the Promotion, as solely determined by Sponsor, will be disqualified. Should any portion of the Promotion be, in Sponsor’s sole opinion, compromised by bugs, virus, worms, non-authorized human intervention or other causes, which, in the sole opinion of Sponsor, corrupt or impair the administration, security, fairness or submission of information, Sponsor reserves the right at its sole discretion to terminate the Promotion and, if terminated, at its discretion, select the potential winner from all eligible, non-suspect entries/likes/comments received prior to action taken. By entering the Promotion and/or accepting a prize, and in consideration thereof, all entrants and winners: (1) agree to be bound by these Official Rules; (2) agree to release, indemnify, and hold harmless Sponsor, Facebook, Instagram, Twitter and their affiliates and each of their respective officers, directors, employees and agents (“Released Parties”) from any and all liability for any claim, loss, harm, damages, regulatory action, costs or expenses (including without limitation property damages, personal injury and/or death) arising out of participating in the Promotion, the acceptance, possession, use or misuse of a prize, or claims based on publicity rights, defamation or invasion of privacy, copyright infringement, trademark infringement or infringement of any other intellectual property right; (3) consent to the use by Sponsor of their names, voices, photographs, likenesses and/or biographical information, testimonials, entry posts, and/or prize information for advertising, marketing, promotional and/or any other commercial purposes in any medium (whether now or hereafter known) throughout the world in perpetuity without further notice, additional permission or compensation unless prohibited by law; (4) agree to participate in any and all publicity and promotional activities (except where prohibited) in connection with the Promotion as reasonably designated by Sponsor; and (5) acknowledge that this Promotion is in no way sponsored, endorsed or administered by, or associated with, Facebook, Instagram or Twitter. Winners may be required to complete and return an Affidavit of Eligibility/Liability Release and Publicity Release. Promotion is subject to all applicable federal, state, provincial and local laws.

The information that you provide in connection with this Promotion will only be used as described in these Official Rules. The information that you provide in connection with the Promotion may be used for Sponsor’s internal purposes but will not be provided to third parties, except as necessary for the administration of the Promotion or as required by law or legal process. By entering, each entrant acknowledges that Sponsor has the right at all times to disclose information (including the identity of the entrant) as necessary to satisfy any law, regulation or valid governmental request.

For a list of winners, please send a self-addressed, stamped #10 envelope between December 1, 2019 and January 1, 2020 to: 49 Front Street E, Toronto ON M5V 1B3. Please specify “Simmer Down” Promotion Winner List on the outer envelope. OR visit www.marleycoffee.com. The winner list will be posted after winner confirmation is complete.